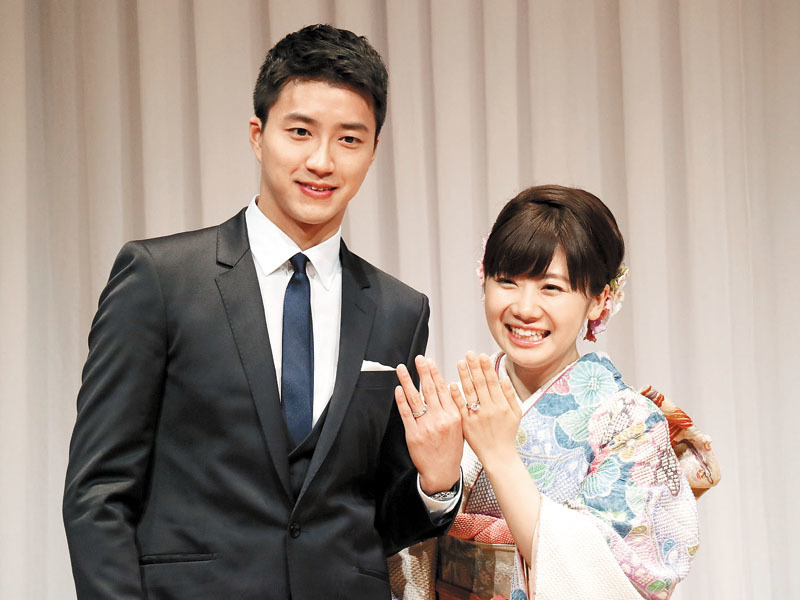 After the end of the Olympic Games in Rio, spent a rare off-season in Tokyo.

Ai Fukuhara and Jiang Hongjie met in 2014, they started the relationship in 2015, then they often travel in Tokyo and Taiwan together, now two people finally got married !

I am pretty sure that a lot of Japanese women are wondering how it is going to be if they get married with a Taiwanese guy or a Chinese guy.

Well, we have a lot of Taiwanese and Chinese people in Japan, but we have not met so many people who married them.

Basically, they are kind, sweet. Also, they do not have the idea of domination of men over women like some Japanese guys have.

Since She spent her youth ages in China playing table tennis, she learned Chinese naturally.

Her Chinese has a northeast accent, but just like a native speaker ！

On the other hand, the husband, Jiang Hongjie is from Taiwan.

He can’t speak Japanese but he said he would try to study it.

In Taiwan, back in history, Japanese had been ruled Taiwanese government for several year, so a lot of elders can speak fluent Japanese.

What caught my most attention was the Kimono Ai was wearing at the press conference.

In Japan, the kimono is so-called “SO-SHIBORI ” which is very high-end, expensive.

I found someone guessed the kimono actually costed over 30,000USD on the internet.

Japanese kimono are so deep and it will take a while to learn it.

Ai were wearing “FURISODE” at the press conference in Tokyo even though she already handed marriage application to the Tokyo government.

Usually, “FURISODE” is for a girl who has not been married.

However, there are some people who wear “FURISODE” at their wedding ceremony, so I guess it is OK.

What kind of costumes are they going to wear in their wedding ceremony?

They will look good in any costumes, anyway.

If you are interested in taking your wedding photograph in Japan, please feel free to contact us.